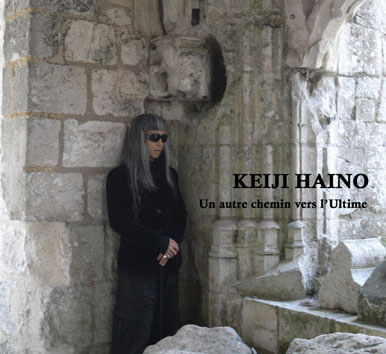 Keiji Haino is an individual that never ceases to provoke new ideas in the minds of those that meet him. And so, although he is usually surrounded by amplifiers, a myriad of effects pedals, and cables plugged into his guitar, he nonetheless amazed his audience with the power of the simplicity of his purely vocal performance and the Centre Pompidou in Paris, in 2008, as part of the InFamous Carousel Festival. The following year I had the opportunity to get to know him a bit better, acting as interpreter for his solo performance at Les Instants Chavirés in Montreuil. Being the intermediary for all his questions allowed me to fully understand the extent to which he attempts to give the absolute best of himself on stage, and how he leads a tireless quest for music. This led me to wonder if what he had done in 2008 couldn’t be done without the technology, replacing the electronic amplification with the acoustic properties of a space. Solidifying this proposal did not take long; my musician friend and label associate, Eric Cordier, who has worked for 20 years with site-specific sound recording, knew of several acoustically interesting spaces in the region in which he grew up.

And so we find ourselves en route to Normandy, in June 2010. We had a week consecrated to the exploration of one voice, and this is not just any voice; a voice developed outside of any school, through a unique journey, a voice simultaneously rock and spiritual, outside any taboo, a voice that shakes us to the core. This time, in addition, this voice is heard in its purest state. Of all the spaces visited, amongst them many churches and caves, a forest, a cliff, a tunnel, industrial wastelands, etc, it was in a quarry cave in the village of La Haye de Routot that he was able to release his entire being, offering up one hour of introspective song, so good that I believed at one moment I saw him disappear… in any case it was at this point that his voice and his body were able to melt into the space, or perhaps to become the atmosphere itself. This album presents this recording, preceded by those made in the church in the same village.